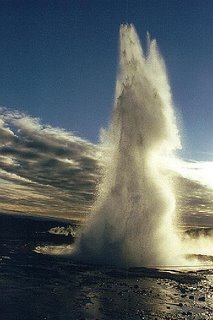 I cited the review comparing their music to "Sucking God's Cock."

As I lay in my bath, fragrance from Hawaii, lavender salts from Argentina, citris mint soap from Barcelona, their rhythm is like God's Orgasm. I slipped into joy-- mental orgasm--floating ecstasy.

Fifteen thousand physical orgasms on, it is pleasant to contemplate the joy of more such ecstasy to come (pun intended).

So goes my bubble bath. Cleanliness next to Godliness. Music is my drug of choice.


Yesterday I wrote a letter to the Atlanta Journal of which half was published. Here it is in its entirety:

The U. S. Senate, after much debate, voted not to amend the Constitution. I agree with your editorial (Waste of Front Burner, 6/7) that this was a misuse of important time in Congress. Even Mary Cheney, daughter of the Vice President, has become disgusted by this pandering to the far right. No liberal, she is exactly correct in claiming that this issue is a generational one. Those old men of the Senate are out of touch with the rising youth of the country. Who won the MTV best kiss award? You got it: the cowboys of Brokeback Mountain. Republicans need to get used to those kisses, or kiss their political future goodbye.

I would have put "their political ass goodbye," but that would have been amputated too.

What drivel fills our newspapers and broadcast news these days...

Excuse me while I go back to my Sinead O'Connor disc.