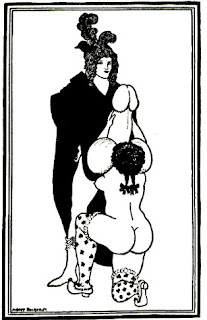 llustration:
Aubrey Vincent Beardsley
Today's Tea Baggers worship the balls of the Koch Brothers. (click). The baggers  are  political finger puppets--  mean, cold, selfish, gun carrying fools of Rupert Murdoch, the Corporate CEOs who pay little or no taxes, the oil industry, and the mad hatters like G. Beck, Palin and other screaming loons who support reactionary 18th C. libertarianism. They would allow unlimited corruption, pollution, and abuse by an elite oligarchy that includes the Bushies and the Cheneys, Clarence Thomas and wife, Karl Rove, and the Republican fat cats who hate the poor, the middle class, and anyone not a member of their quail hunting, fast shooting club. How anyone who is not an indifferent, mindless multi-millionaire, living in a fantasy world where there is no global warming, where no one dies in wars, where gays are locked away, where Christmas is always white, could vote libertarian or Republican, when there is such suffering in the country and the world, is beyond me. Greed and ignorance to the point of self-mutilation are the order of the day.


Is there no way to lick the tea baggers? If only the Democrats had some balls...

Posted by Jack Miller at Friday, October 29, 2010 No comments: Links to this post

Mr. Reich echoes what we've been saying for some time: our nation has become an oligarchy (Plutocracy)

First, income in America is now more concentrated in fewer hands than it's been in 80 years. Almost a quarter of total income generated in the United States is going to the top 1 percent of Americans.
The top one-tenth of one percent of Americans now earn as much as the bottom 120 million of us.
Who are these people? With the exception of a few entrepreneurs like Bill Gates, they're top executives of big corporations and Wall Street, hedge-fund managers, and private equity managers. They include the Koch brothers, whose wealth increased by billions last year, and who are now funding tea party candidates across the nation.
Which gets us to the second part of the perfect storm. A relatively few Americans are buying our democracy as never before. And they're doing it completely in secret.
Hundreds of millions of dollars are pouring into advertisements for and against candidates - without a trace of where the dollars are coming from. They're laundered through a handful of groups. Fred Maleck, whom you may remember as deputy director of Richard Nixon's notorious Committee to Reelect the President (dubbed Creep in the Watergate scandal), is running one of them. Republican operative Karl Rove runs another. The U.S. Chamber of Commerce, a third.
The Supreme Court's Citizens United vs. the Federal Election Commission made it possible. The Federal Election Commission says only 32 percent of groups paying for election ads are disclosing the names of their donors. By comparison, in the 2006 midterm, 97 percent disclosed; in 2008, almost half disclosed.
We're back to the late 19th century when the lackeys of robber barons literally deposited sacks of cash on the desks of friendly legislators. The public never knew who was bribing whom.
Just before it recessed the House passed a bill that would require that the names of all such donors be publicly disclosed. But it couldn't get through the Senate. Every Republican voted against it. (To see how far the GOP has come, nearly ten years ago campaign disclosure was supported by 48 of 54 Republican senators.)
Here's the third part of the perfect storm. Most Americans are in trouble. Their jobs, incomes, savings, and even homes are on the line. They need a government that's working for them, not for the privileged and the powerful.
Yet their state and local taxes are rising. And their services are being cut. Teachers and firefighters are being laid off. The roads and bridges they count on are crumbling, pipelines are leaking, schools are dilapidated, and public libraries are being shut.
There's no jobs bill to speak of. No WPA to hire those who can't find jobs in the private sector. Unemployment insurance doesn't reach half of the unemployed.
Washington says nothing can be done. There's no money left.
No money? The marginal income tax rate on the very rich is the lowest it's been in more than 80 years. Under President Dwight Eisenhower (who no one would have accused of being a radical) it was 91 percent. Now it's 36 percent. Congress is even fighting over whether to end the temporary Bush tax cut for the rich and return them to the Clinton top tax of 39 percent.
Much of the income of the highest earners is treated as capital gains, anyway - subject to a 15 percent tax. The typical hedge-fund and private-equity manager paid only 17 percent last year. Their earnings were not exactly modest. The top 15 hedge-fund managers earned an average of $1 billion.
Congress won't even return to the estate tax in place during the Clinton administration – which applied only to those in the top 2 percent of incomes.
It won't limit the tax deductions of the very rich, which include interest payments on multi-million dollar mortgages. (Yet Wall Street refuses to allow homeowners who can't meet mortgage payments to include their primary residence in personal bankruptcy.)
There's plenty of money to help stranded Americans, just not the political will to raise it. And at the rate secret money is flooding our political system, even less political will in the future.
The perfect storm: An unprecedented concentration of income and wealth at the top; a record amount of secret money flooding our democracy; and a public becoming increasingly angry and cynical about a government that's raising its taxes, reducing its services, and unable to get it back to work.
We're losing our democracy to a different system. It's called plutocracy.
Robert Reich is Professor of Public Policy at the University of California at Berkeley. He has served in three national administrations, most recently as secretary of labor under President Bill Clinton. He has written twelve books, including "The Work of Nations," "Locked in the Cabinet," "Supercapitalism" and his latest book, "AFTERSHOCK: The Next Economy and America's Future." His 'Marketplace' commentaries can be found on publicradio.com


Posted by Jack Miller at Tuesday, October 19, 2010 No comments: Links to this post 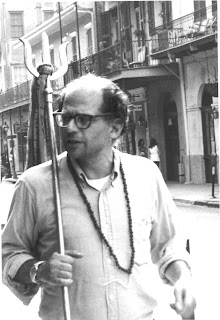 Sunday's New York Times Book Review ended with an absurd comparison of today's Tea Bag movement with that of the Beats. You can read it at:
http://www.nytimes.com/2010/10/10/books/review/Siegel-t.html?ref=books
Besides claiming they both wanted individual freedom and opposed big government, the article just rambled on about the dissimilar, discordant traits of each.
Even to mention TV clown Glenn Beck in the same breath as Allen Ginsberg is to conjure up, as one of my friends put it,
Vomit.
How are they unalike? Let me count the ways:

The Beats were a group of writers and artists who loved and explored alternate religions to Christianity. They pursued Buddhism and Zen.
Baggers are not writers, but the haters of books and intellectuals who mostly believe in a literal reading of the Bible.
The Beats explored and practiced expanded consciousness, including sexual experimentation with homosexuality, bisexuality, and group sex.
Baggers demonstrate reduced consciousness, conformity, and the denial of sexuality for anything but procreation. They condemn gays, want to outlaw the woman's choice of whether to have a baby, and even want to stop masturbation.  They have suggested that single, sexually active women should not be allowed to teach.
Beats reject materialism and brainwashing.
Baggers are funded by right wing billionaires who favor less taxes for the very rich.
Beats are pro-ecology and love nature and the environment.
Baggers oppose any regulation of corporations, industry, or big oil. The environment is to be used up and wildlife is for the sport of hunters.

The Beats enjoyed being high on marijuana, for the most part.
Baggers don't even like tea and have no idea what the Boston Tea Party was about.


The Beats opposed war and the policies of Dick Nixon. They were diverse and fought for the rights of minorities.
The Baggers are mostly angry  white men and women who support spending more for the military , resent other ethnic groups, despise diversity, and are often bigots against blacks, gays, and women. Even the women in the movement oppose women's rights.

Posted by Jack Miller at Tuesday, October 12, 2010 No comments: Links to this post

This past week poet Alfred Corn asked the question on his Facebook page, "Irony--can it be defined in non-ironic fashion?"  Today, I saw the film Social Network and the ironies in the film spurred even more thought on the subject.


To begin, I'd have to answer Alfred's question by saying no. As soon as I even try to define irony, irony influences my thoughts, making me want to be ironic in my response. That is not to say we cannot talk about irony in a straight-forward manner, but that even when we do, there is an inclination to add a touch of irony. Irony is needed to explain irony.


Irony has unquestionably played a key role in my life. Accepting the label of gay in my 20s was blatantly ironic, I thought. Gay. The least gay thing about me was that I was gay. The very term is fraught with irony, going back to Oscar Wilde, no doubt one of the models used in creating the term for homosexuality. Yes, Wilde was gay, even in the horrors of his life in prison. What could be more linguistically ironic than the oxymoron, gay suicide, filling our newspapers today?


Irony is subtle; defining it ought to be not only difficult, but ongoing. Pin it down and it becomes sarcasm, cynicism, a joke, a witticism, a play on words, a pun, perhaps. Wikipedia breaks the term down into it's many exemplary uses, Socratic, tragic, literary, linguistic, artistic, and the like. Yet, those who use irony might well disagree on what is or isn't irony-- Duchamp's putting a mustache on Mona in L.H.O.O.Q., above, for instance.
The film, Social Network, presents us with a creator of Facebook, a network with half a billion friends, unable to be or keep a friend himself. Irony. And there are many other ironies in the film. If the story  has any truth to it, Facebook as it has evolved today is far more than the original idea as Mark Z. conceived it. If Facebook has become a substitute for making real friends, then that too is ironic. Yet, as I see it, Facebook has provided far more than a place to meet ones potential sex partners; it has become a place to communicate in a genuine way. What started out as a convenient way to stay in touch with friends and acquaintances has become a means of sharing ideas with those who share our interests, as well as a way to renew and maintain ties that we should not have lost. The implications for education using Facebook are just arising.
There is much more to both irony and to Facebook that I'd like to explore this gorgeous October day. But I have dinner plans, so those thoughts must wait.
BTW, there is a brilliant review of the film and its irony in the New Yorker:

David Fincher and “The Social Network.”

Posted by Jack Miller at Sunday, October 03, 2010 No comments: Links to this post