The Evolution of Same-Sex Love ( Man in an Orange Shirt) 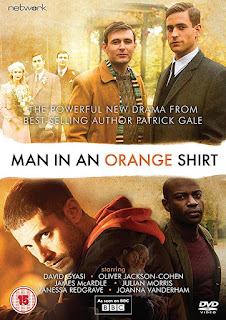 How much has changed in gay love since the end of World War II? This story by Patrick Gale does give us the differences; but it also gives us the ways in which some things have not changed. Michael Berryman and his grandson Adam share important traits. For instance, both men try unsuccessfully to hide their true natures from Flora Berryman, portrayed in her later years with painful depth and sympathy by Vanessa Redgrave. Neither grandfather nor grandson is willing to commit to homosexual love, regardless of the date.

While Michael chooses to abandon his love life for a traditional family, one involving untold pain for both himself and his wife, Adam has the good fortune of meeting someone who knows how to win his heart and turn him from sex aps to real human contact. The sensitivity, the subtlety, and the patience required to do this is beautifully fulfilled by David Gyasi (who was astounding as Achilles in "Troy, Fall of a City.")

Of course, one of the necessary revelations for Adam is learning of his grandfather's story. I love the way the painting is used as a device for exposing Michael's denial of his own love. It also gives emotional depth to the heart-broken Flora.

Things fall in place in a way that does stretch belief. That Steve is an architect as well as an excellent lover is perhaps too fortuitous. I do love the archetype of the cottage as love nest. That Flora kept it rather than selling it also tells us a good bit about Flora. Even she, once disgusted by the idea of gay sex,  ultimately comes down on the side of love.

That the generation in between is missing stirs some curiosity. We never learn about Adam's parents at all. Does that not matter? What happened to Thomas? Did he move to France and find romance? And was the cottage used by Michael for other love affairs Flora did not know about?  How are we to take Caspar and his relationship to Steve? (I enjoyed seeing Julian Sands again. Long ago he made a film here where I live). That the story leaves us curious about many other possible relationships makes the story seem incomplete. Life is not quite as simple as Man in an Orange Shirt makes it.

There are a number of humorous witticisms in the story. How many caught the fact that the young lovers who find each other are Adam and Steve? There are other clever and touching details in this film. We should all be so lucky as to meet someone like Steve. 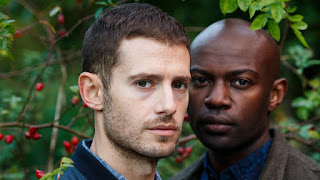 Note: As it turns out, there was once a second part, or middle part, that was left out, a part addressing the questions I have raised. Here is a marvelous interview with the author: 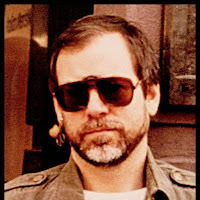 I am a Savannah boy, since I was born there and lived there until I went to college. That's how one starts, right? The colleges certainly are an essential part of my identity-- U.Va., Sewanee, Tulane, Emory University are the major ones. Left Va. for Sewanee in order to change majors (math to philosophy) and for reasons of love and sexual identity.
Degrees? B.A., M.A., M.Ln.,
Ph.D. in Philosophy (Tulane). My Doctoral Dissertation was on Philosophy of Art--
(http://zonetotal.blogspot.com/2009/12/my-doctoral-dissertation-cited.html)

In the areas of literature and philosophy: Shakespeare to the Beats;  Plato, Descartes and Whitehead;  the existentialists, especially Sartre and Simone de Beauvoir.  Novels have shaped who I am: Tolstoy, James Baldwin, Iris Murdoch, Alan Hollinghurst, Edmund White...and works from the Romantic poets to Michel Foucault. And that doesn't even touch on the art and artists I love...

I've had a long career in teaching and librarianship: Two universities, two art colleges, two high schools, and the High Museum of Art along with other oddities like Law Librarian at the Georgia State University Law School. Teaching for 17 years at the Atlanta College of Art was especially rewarding. During those years I wrote articles and reviews for Art Papers and other publications. I met wonderful students who are still making art today. Kara Walker took two of my elective classes. And many students and colleagues are now among my Facebook friends. Teaching is a two-way avenue.
It was also during this time that we collected much of the art we now own, the Larry Connatser paintings, for instance, art from Mexico and South America, and the photographs of my friend Paula Gately Tillman. I also own Hogarth engravings and a work by Aristide Maillol.

Since the age of 18 I have kept journals. My first trip to Europe in 1970 was as formative as any college course. I spent three months there, writing Journal 5, traveling by Eurail pass, soaking up art and history as never before.  Seeing the world and other cultures has always been an inspiration vital to me. 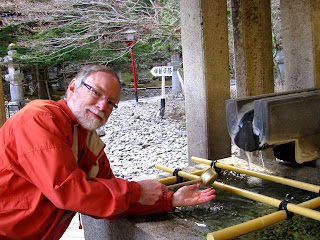 My relationships, like my train trips in Europe from country to country, crossed the landscapes, the bodyscapes of intimacy and sexuality.  I was a Hippie in the 70's and thank Dionysus for it. It was then I found lifelong friends Jim and Julian, now deceased, who added so much to my life and are the subject of a novella I wrote. Savannah, New Orleans, Mexico, and San Francisco (where I lived on Russian Hill), with frequent jaunts to New York and New England, were my fertile crescent and home during the 70s. Those were the days of meeting Allen Ginsberg, W.S. Merwin, and Lawrence Ferlinghetti-- A time of art, music, theater, and philosophy. It was the time when I met the wonderful actor and my close friend, Joseph Mydell.

Today, I am married to my darling, Darryl Gossett. We have a nexus of relationships with others. Our travels and life together fill many of the pages of this Blog. He is a talented editor and award winning writer (His article on Alzheimer's) (Edith Honeycutt --with whom we had a delightful dinner).  My aim now is to shift from critical writing to more creative writing, such as my "Art Memo" and several reviews in The Gay and Lesbian Review, Worldwide, (another link to the essay is Art Memo; and to my most recent review, Alfred Corn's Miranda's Book). I continue to teach, continue writing essays, poetry, short stories;  and  creating a photographic vision in sync with my writing, Poems and Short stories: Apricocks and 4 Way.

But enough about me...

Here's to my friends, loved ones, and artists I've encountered: These portraits are among the best of my accomplishments, not to mention the relationships we have nurtured that made them possible. 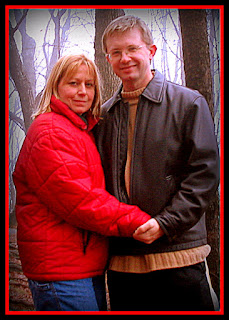 To the chief intensity: the crown of these
Is made of love and friendship, and sits high
Upon the forehead of humanity.

Jack
Posted by Jack Miller at Friday, June 01, 2018 No comments: Links to this post