When I was born in 1947, WWII had just ended and there was hopefulness and peace in the minds of many. Despite the evolution of the atomic bomb into ever deadlier forms, the 1950s were a time of recovery and prosperity for many; though not for all, as the civil rights struggles well into the 1960s revealed. It was also a time of illusion and ignorance of what was brewing worldwide.The cold war turned hot in Korea and Vietnam. No attempts at isolation by various countries could overcome the global interconnections that spread everywhere, including rising pollution and discontent. I think Einstein's theories became a metaphysical reality we still have not grasped. Human existence has become a blight upon the the Earth, a deadly blight that could erupt in war, pollution on a cosmic scale, destruction of most other species, and eventually our own. The truth is simply too hard to handle; thus most people, including our leaders, retreat into religious superstition, mindless entertainment, or head in the sand indifference. Diogenes, alone and long dead, haunts us with echoes of cynicism: Best never to be born; 2nd best, to die as soon as possible.
Personally, I remain loyal to Epicurus, enjoy simple pleasures, realize the world is doomed, stop and smell the roses while they last. My last couple of decades I shall devote to what pleasures remain as I accept, gladly, an end to awareness of what humanity has wasted, what beauty lost, what irreversible damage done. 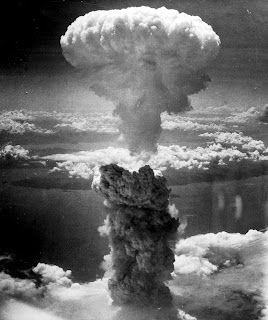 The mushroom cloud of the atomic bombing of the Japanese city of Nagasaki on August 9, 1945 rose some 11 mi (18 km) above the bomb's hypocenter. --Wikipedia.

38 million pieces of plastic waste found on uninhabited South Pacific island
Henderson Island, part of the Pitcairn group, is covered by 18 tonnes of plastic – the highest density of anthropogenic debris recorded anywhere in the world
THEGUARDIAN.COM


Posted by Jack Miller at Saturday, May 27, 2017 No comments: Links to this post


Below: Andrew Johnson and Donald Trump 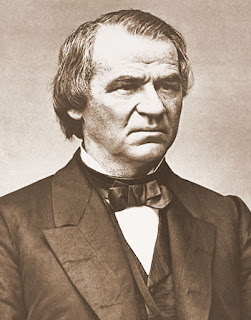 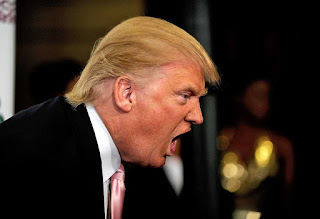 As we prepare to see the shadow of the moon eclipse the sun this August, I can't help thinking that the total eclipse might be a symbol of the light of reason being snuffed out by the irrational movements of our president. If impeachment becomes as inevitable as the eclipse is, we shall witness American History sinking into darkness as it did with Andrew Johnson, Richard Nixon, and Bill Clinton.

Andrew Jackson was impeached to a large extent for his firing of the Secretary of War. He fought with a Congress eager to remove him, and the history of his survival of the Senate Trial by one vote is a fascinating story.

Nixon did not give Congress the chance actually to impeach him, resigning when it was all too obvious what Congress would do. He was not impeached; but then he was the only president, so far, forced to leave office.

Clinton became Republican revenge. Among other things, Congress impeached him for lying about his affair. Few today think the impeachment was justified. His acquittal after a pompous show trial in a Senate, supervised by a gaudily robed Chief Justice, was a foregone conclusion and wound up adding to Clinton's popularity and approval, much to Republican dismay.

If Trump's collusion with Russians or his obstruction of justice  are proven, he will also be impeached. However, it may be that only some of his associates will be charged with crimes. The new special counsel, Robert Mueller, will determine how far up to go with his investigation. As Senator McCain remarked, the investigation could well echo Watergate.

My hope is that the hypocrisy, the fawning, the greed, and the corruption of the Republican Party will finally be seen for what they are, that Republicans will be soundly rejected by voters nationwide. My faith in the electorate hit an all time low last November, and it will take a lot to convince me that the electorate can overcome prejudice, stupidity, apathy, greed, and naivete in order to elect to office those who care about ordinary people, those in need, and the Earth itself.

We count on the sun returning after the eclipse, just as we count on reason and integrity to return to our government after the current darkness.


Posted by Jack Miller at Wednesday, May 17, 2017 No comments: Links to this post