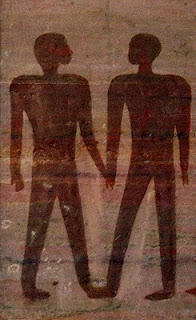 
After reading the Utne Reader's current article on Faux friends, I've gone back to Aristotle, whose concept of friendship I have always admired. Some of my Facebook "friends" are true friends and some of my true friends are not on Facebook at all. Nonetheless, I do think Facebook offers a productive gathering place for sharing ideas and experiences with people we like or might come to like, as well as offering renewed friendships. So far I find value in the posts and comments of my 170 acquaintances and the various groups I've joined, despite the rather silly shared games and quizzes.


Here is an excellent summary of Aristotole from the Stanford Encyclopedia:

http://plato.stanford.edu/entries/aristotle-ethics/
Posted by Jack Miller at Tuesday, April 20, 2010 No comments: Links to this post

Savannah 2010
Springtime in Savannah was a delight: Jesus killed and resurrected. Bunnies. Eggs. Chocolate. What sort of religious celebration is this? Easy. It's the Pagan celebration of the Vernal Equinox. After all, Easter falls on the first Sunday after the full moon, after the Vernal Equinox. It is about the rebirth of everything after the long Winter. Jesus was born right after the Winter Solstice. He arises from Death right after the full moon of the Vernal Equinox, the first day of spring. It's all just bastardized Pantheism. Lets just worship Nature and stop all the zombie nonsense, all the torture images, and cannibalistic cuisine, eating Jesus's body and drinking blood. Lets just eat eggs and chocolate, instead. And enjoy all the newly bloomed lilies.

Posted by Jack Miller at Sunday, April 04, 2010 No comments: Links to this post