The Merry Month of May and the approach of the Solstice


Since my return from Japan, there have been several soirees and treks of note. As April gave way to May, Will and I took the train to New York to join Joe and see the BAM production of Julius Caesar.
(http://www.bam.org/theater/2013/julius-caesar) 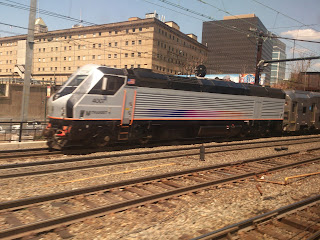 View from our train window

What can one say about AMTRAK? It was an adventure, an ordeal, and an experience. We dined in the Dining Car to over-priced food and we had scotch in the club car. It was almost impossible to sleep, huddled against each other in coach with the overhead lights in our eyes and our heads struggling with blankets and alternating from his shoulder to mine. We emerged from the train into Penn Station and walked out onto the dazzling streets of Manhattan at mid-day, headed to Times Square, and then the A-Train to Brooklyn where Joe met us in the Marriott Hotel. Ads for Julius Caesar filled the subway car. 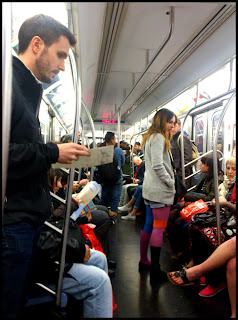 From that point on we filled the next three days with theater, art, Greenwich Village, a walk across the Brooklyn Bridge, Sunday in Central Park, Seeing Gertrude Stein (in the Metropolitan Museum), and Will's singing upstairs at the Stonewall Bar. Meals with Joe and friends, Julius Caesar, and taking photos of all the Cherry trees in full bloom around Washington Square and in Brooklyn. 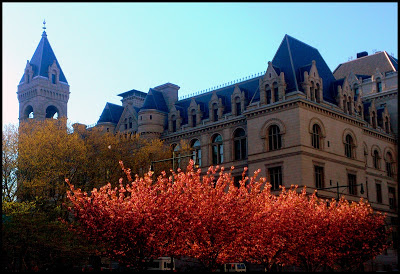 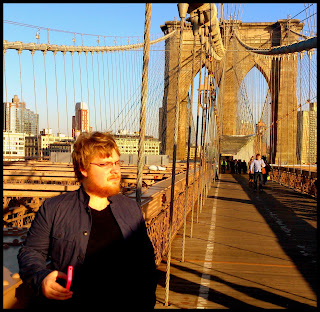 Will takes in the view

On our last day in Brooklyn, Joe brought us NY Bagels, cream cheese, and other delicious b'fast fare. Then we made our way by subway to Penn Sta. where Will entertained with song and guitar (so near Madison Sq. Garden) until we boarded the train home. Will's performance continued 'til midnight in the club car... 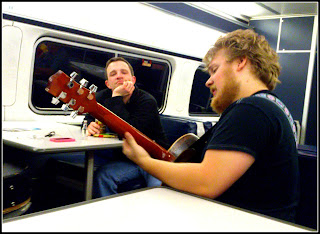 Will on guitar playing for a Whovian.

Shortly after the trek to New York, our friends Wolfgang and Donald arrived from Frankfurt and it was three days dining out in Atlanta followed by another trip to Asheville, NC with lunch at the Dillard House and a visit to Graveyard Falls on the Blue Ridge Parkway. 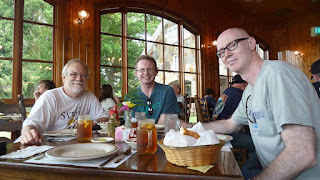 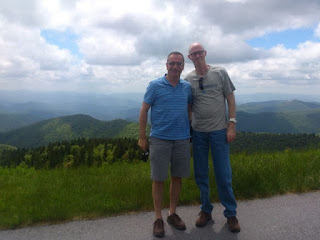 After Asheville came Lookout Mountain and a spectacular June Wedding. No expense was spared for the marriage of Katie and Oliver...

Starr and I had a good time attending the dinners, champagne breakfasts, reception, and enjoying the ever-changing, cool early summer weather on Starr's Porch and new deck. 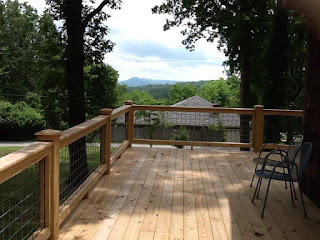 By way of review, here is the New Yorker's Review of Julius Caesar as performed in New York...

For this time I will leave you.
To-morrow, if you please to speak to me,
I will come home to you; or if you will,
Come home to me, and I will wait for you.

Mark Antony, manipulating the crowd during his “friends, Romans, countrymen” oration, is similarly straightforward. His reiteration of the word “honorable” emphasizes its unwieldy shape and ironic intent in what is otherwise a staccato pentameter:

Good friends, sweet friends, let me not stir you up
To such a sudden flood of mutiny.
They that have done this deed are honorable.
What private griefs they have, alas, I know not,
That made them do it. They are wise and honorable,
And will, no doubt, with reason answer you.

Later, Antony, in his arrogant way, tells Octavius “I have seen more days than you”; later still, at the Battle of Philippi, he attempts to pull rank.

ANTONY: Octavius, lead your battle softly on
Upon the left hand of the even field.
OCTAVIUS: Upon the right hand I. Keep thou the left.
ANTONY: Why do you cross me in this exigent?
OCTAVIUS: I do not cross you; but I will do so.

It is an ominous bit of foreshadowing, and the lines are delivered well. But I missed a certain intensity that might have made this young Octavius (Ivanno Jeremiah) more convincing. This, after all, is the man who will transform himself into the Emperor Augustus and will rule the world, and it is to him that Shakespeare gives the very last words of the play. I wished to see more evidence of that potential, in this play that is so much about how a fate guessed at today can become a reality tomorrow.
In the spring or winter of 1865, sometime between the Booth brothers’ “Julius Caesar” performance and Abraham Lincoln’s death, Lincoln had a nightmare. He recounted it to his friend Ward Hill Lamon, who wrote it down. Lincoln had seen in his nightmare a mournful crowd in front of the White House, and on asking who had died, had been told it was the President, “killed by an assassin.” The dream “annoyed” him for quite a while after, and then, presumably, he let the matter be. As in Shakespeare’s play and Caesar’s life, the portent proved exact.
Teju Cole is a photographer and writer. His novel “Open City” was published last year. He contributes frequently to Page-Turner.
Photograph by Richard Termine.
http://www.newyorker.com/books/page-turner/an-african-caesar


Posted by Jack Miller at Wednesday, June 19, 2013 No comments: Links to this post