The Heart of Darkness Continued

Music of the Spheres 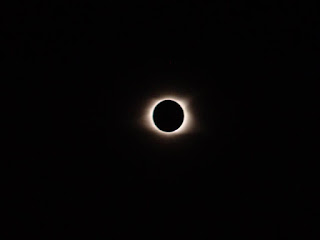 The Zone of Totality

Part 1 described the ecstasy of beholding a total eclipse of the Sun in North Georgia. The photo here was made by my dear friend Steve Killian with whom Darryl, several other Killians, and I  enjoyed the splendid, inspiring day of the eclipse-- feasting on BBQ and swimming in the sunny pool.

It is thrilling to enjoy life, appreciating the beauty of Nature and the blessings of love and friendship. Yet, for all that, for all my desire that the beauty and richness of existence would prove an enduring plenitude, I know what the future holds for this lovely planet Earth.

Just as the Moon followed its orbit, just as its disc covered the disc of the far more distant Sun, forces are moving Earth as certainly toward its own darkness. We can champion and celebrate our lives, enjoy what we consider good in life, promote the small victories of curing a disease, saving a species here and there, cleaning up some of the garbage and filth we heap everywhere, land and sea. Yet we know, and science proves, that a planet with a 2 billion increase of population from 7 to 9 billion people in the next 30 years cannot sustain us. Whether we admit the scientific truth or not, focus on happy thoughts... or not, take to religion or the power of positive thinking, the inevitable is already happening, will continue to happen until the planet warms to catastrophic levels, the seas rise, many species become extinct, and the planet we love so much turns to desolation and death.

Should I add, as Al Gore does in his new film, or good journalists do daily now, the details of glaciers and polar caps melting, increasing deadly floods and storms, dying species, micro-plastic consumption by sea life everywhere, the devastation of overpopulation, the already occurring disasters from Nature under assault from our unimaginably vast pollution, the possibility and reality of wars...? No, the evidence is simply too great to ignore by all who are able to understand it. Science and truth are indifferent to our religion, our blind optimism, our hiding from the facts.

Scientific evidence for warming of the climate system is unequivocal.

Read while the facts are still available. Yes, this is really happening despite what T. and his corporate puppets are saying. Despite religion. Despite the power of positive thinking and despite ignoring the truth.


Unlike many, I am able to live the maxim: Eat, drink and be Merry; for tomorrow we shall perish. We shall, sooner than most realize. Watching the indifferent Moon block from our view the indifferent Sun made me aware, as if in a revelation, that Plato was right about Beauty. It is a Form, an Ideal that transcends our fragile existence. From the point of view of eternity, as Spinoza was aware, our passing worldly cares are nothing.

Posted by Jack Miller at Wednesday, August 23, 2017 No comments: Links to this post

The Heart of Darkness (Total Eclipse) 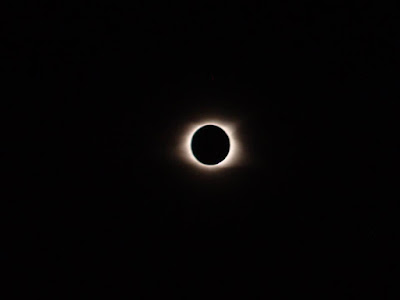 Total Eclipse from The Dillard House. Photography by Steve Killian.

Lee and I enjoy the pool at the Dillard House. Photo by Karen Killian.

Ours is a country of absurdity and ignorance. Try as I might, it is hard not to be condescending rather than sympathetic. These were some of the sweet people here for the eclipse. Everyone here was amazed by it. They realized at last that yes they could stare in awe at the Sun and Moon during totality, with no glasses, filters, or fear. As darkness arrived, as a cool breeze arrived, as that wonder in the sky shone forth, we all felt an ecstasy, no other word for it. No photos will convey it. All who saw today's total eclipse here in North Georgia, will always recall it. Philosophy begins in wonder; we all were momentary philosophers today, young, old, all races, all creeds, humbled by sublime celestial beauty. With Darryl Gossett, Karen Killian, Steve Killian, Jacob Killian, Lee, David, and Carl.

As the Moon, this Moonday, leaves the disc of the Sun, leaving us as in a dream state, I am saturated with a sense of eternity. For two and a half minutes we took off the filter glasses, all the cheering and talking stopped, and we felt the bond of sharing a sacred experience of Nature Naturing as Spinoza would say. That image, the Moon, encircled by the Sun's corona will be with me as long as I live. Yes, we shall post photographs, but the holistic holiness is ours and belongs to those of us in the Zone of Totality.

After a gathering in the Killian room, we had a delicious dinner of country ham, fresh lima beans, fried okra ... Then Steve and I whipped out our binoculars and beheld the Milkyway, Scorpio, the big and little dippers, the Summer Triangle of Vega, Deneb, and Altair, Jupiter, Saturn, and bright Arcturus. Later, after a soak in the jacuzzi with Karen, under the starry sky, I happened to see Brilliant Venus in the predawn East from our balcony. The bright Sun this morning promises eclipse ecstasy in a few hours.

Darryl and Karen enjoy our get together.

After a nice long swim in the pool, I tried out my eclipse glasses on the lovely disc of the Sun. The ancients who worshiped the Sun as a God knew a wisdom we have forgotten.

Posted by Jack Miller at Wednesday, August 23, 2017 No comments: Links to this post