The Ship of State


Our ship of state goes in circles. We are rounding the loop of 1980 when voters rejected the truth Jimmy Carter told us about conservation and using less oil. We are rounding the election of '94 when voters took out a contract on the Clintons for daring to promote health care for the poor and sick. By January, if all goes 'round as expected, Republicans will again shut down the government in order to guarantee the corporations unlimited power to do as they please. Why? The reason too repeats: misguided selfishness of the worst kind. It is not only that we will not recycle, not pay taxes to make the world a better place, it is that we want our phantom edge over the others, the immigrants, the blacks, the gays, the Muslims. We will not learn Spanish, damn it. Nor will our undereducated offspring.  Thank You Jesus (even if you really were for the poor and outcast, you Socialist). Vote Tea Bag.
Amen.


Posted by Jack Miller at Wednesday, September 22, 2010 No comments: Links to this post

Send in the Bodhisattvas Sixteen years ago Newt Gingrich lead the charge of the Right Wing to overtake the Congress, to defeat health care for the needy, and to bring the government to a halt. The happy days of prosperity that the Clintons were ushering in ceased as Republicans ground the gears of government to a nasty stop. Then they orchestrated an outrageous impeachment of the president for his sexual misconduct, despite the ever growing sexual scandals Republicans themselves were engaging in. Republicans threw tantrums, ranted against socialism, and did everything in their power eventually to capture the White House, even if it meant fudging the vote in Florida and using the Supreme Court to put Florida in the Bush column in spite of the voters of Florida, in spite of Gore winning the popular vote by half a million votes nationwide. The Republicans spent two decades in power bringing this country to its knees with unfounded wars, enormous deficits, corrupt tax breaks for corporations and billionaires, and irresponsible pollution of the environment. They have done this in great part by pretending to be Christians, instead of selfish, greedy, godless plutocrats.
Since selfish, greedy, powerful plutocrats own the media, Democrats are lost in the rush to replay every word and gesture of the tea party scoundrels-- Palin, Beck, Brewer, Bachmann, the list goes on. Gaffs become laughs, and the anti-intellectual fervor knows no bounds. Intellectuals must be Muslim Marxists (never mind the oxymoron). In the eyes of the media, the revolt against the devastation of Republican rule that took place in 2008 was a misguided fluke. Are we headed back (back back back) to 1994? Will we face another Republican congress ready to shut down the country, rather than compromise. Will the Supreme Court step in again to rescue a losing Republican for President in 2012? Will congress impeach Obama for being un-American, declaring him unborn in the U.S.A.?
None of this seems far-fetched to me. When the majority of a democracy refuse to vote, much less be informed about their candidates, disaster is always possible, perhaps likely. Ours is a country where ignorance and naivete are rampant. Our Oligarchy is really controlled by those powerful CEOs making billions and laughing at the rest of us. It will take their enlightenment, their seeing pollution seeping into their favorite vacation spots, the world disintegrating into war and filth, before we truly achieve genuine reform. How can we get the fat cats on the path to enlightenment?
Send in the Bodhisattvas...

Posted by Jack Miller at Wednesday, September 08, 2010 No comments: Links to this post 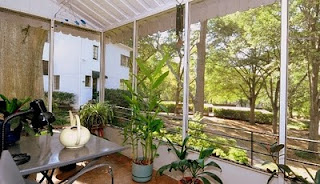 As the first fall like breezes blow over Druid Hills, it is pure delight to sit on the porch, watch the tame sunlight move over the lawn and oaks, and read Gail Collins in the New York Times. It is with nostalgia and bewilderment that I think about the state of the world. Perhaps I am no different from the yapping dog, high pitched complaint in the sweet morning air. Why not just be quiet and content, sip my delicious coffee, take deep breaths and meditate. A blessed three day weekend lies before me.
Still, it is worthwhile to see clearly what is happening in our country this autumn. Ms. Collins writes about Arizona governor Brewer and her poor performance at a debate. Why does her incompetence not register with the Arizona electorate? It would be understandable if, as Plato wrote thousands of years ago, the Republicans were swaying people with brilliant, if untrue, speeches and posturing. But they are not even giving popular, clever presentations. Voters really believe that Democrats are socialists? They really oppose health care for the poor? They want the rich to pay less taxes? They don't want devastating pollution and bank corruption regulated and controlled?
The only explanation I find is that it must be religion. The American people will believe anything if it is veiled in religious nonsense. The Republicans have figured out how to portray their opponents as evil, to tag Democrats as evil because they are not sticking to the religion of the Founding Fathers. Never mind that the real founding fathers were deists and lived lives of sexual exuberance, that they are far more like Bill Clinton than George W. The Tea Baggers and the corporate Republicans have got Jesus, and voters love their Jesus. Flag and cross are just too powerful to resist.
This week Stephen Hawking explained to us that God did not create the universe. The idea of an omnipotent, all knowing god has been an absurd and contradictory notion for far too long. Science and philosophy have shown the emptiness of the god concept. Nietzsche explained how Christianity has poisoned all sense of what is noble in life. Sartre revealed how logically ridiculous the idea of god is. Hawking knows that science can explain the world beautifully without god. Epicurus knew the same thing long before the birth of Jesus.
And so, this crisp morning, it is clear to me why voters are going to overthrow the Democrats in November. They prefer the ignorance of faith in what oppresses them to belief in science, philosophy, and the truth. Obama is the anti-Christ, the Muslim, the Socialist, the man who dares to oppose the rich and powerful gods of the media, big oil, the corporations, the banks, Wall Street. Better to stick with Beck, with Jesus, with the patriots like Brewer and Palin. Keep out the evil aliens, the Latinos, the Muslims, the infidels. Let the unemployed, the homeless, the sick and weak starve and die. But don't reward laziness. Worship the rich and famous, drool over their dress and their mansions. Work hard for minimum wage, go to church, count your blessings. That's the American way.
My gay husband remains in New Orleans for Southern Decadence this weekend. He inhabits the kind of world many Americans fear, a hedonistic world of pleasure. Buddha may be right that there is suffering in the world, that it is unavoidable, a part of life itself. Yet I can't help wondering why it is that so much of our suffering is self-inflicted. If there is anything I've learned from philosophy, it is that we should embrace every moment of joy with all our heart-- because tomorrow the materialistic, greedy capitalists may snatch what little we have away.
Jack
Posted by Jack Miller at Saturday, September 04, 2010 No comments: Links to this post