The article, below, from Salon- discussing   Sex at Dawn- echoes a long discussion we had Friday night until well past midnight...

Love and possessiveness are mutually exclusive, as I see it. Jealousy erodes love. Ownership of another human being, in any way, excludes care and compassion. Enforced monogamy, which brings the end of so many otherwise rich relationships, is rooted in insecurity and fear. Ideally, love should be transitive, not a closed equation. This article and the book it covers raise fascinating questions about how we think about society and about those we love.

Just as we're omnivores who can swear off meat, we're a promiscuous species capable of change, an expert argues

Posted by Jack Miller at Sunday, July 31, 2011 No comments: Links to this post

Riding the wave that's riding the wave-- lyrics I heard a few nights ago at a near empty cafe off Amsterdam Street. The image conjures so many waves-- past, present and future; waves  personal, in the lives of my friends, and in the country and world, at large. As the tidal wave of the world economy threatens to wipe us all out financially, all of us but those on the oil tankers or basking upon the vast yachts of the bankers, I think instead of all the healing waves that have washed over me and those I love. When I was a child, I delighted in building sand castles and watching the rising tide fill the moat, wash away the walls, inundate the castle. With the ever approaching financial limits of retirement, I see my present sand castle slipping away into the salty water, imagine all the comforts of my years of contented bourgeois life becoming austerity, or at least parsimony. And when actual retirement arrives, I plan to live as close as possible to the sea.
In my view, nothing can take the place of a walk on the beach. For decades I have lived in Atlanta, having to drive at least 250 miles to the ocean. Each year I have lived here I have driven or flown to oceans and seas all over the world. How do I love thee? Let me count the seas, from the Aegean to the Pacific coast of Hawaii, from Glacier Bay in Alaska, to Bergen's coast of Norway, to the Straights of Magellan, to the Straight of Georgia in Canada to the beaches of San Juan, Puerto Vallarta, and Manzanillo, and those long golden sand strands of shore in Australia. Whether the wild beaches of Big Sur or along the Oregon coast, or the tame Gulf of Mexico powder beaches of Santa Rosa Island, there is a sublimity to being beside the ocean, an "ataraxia," that transcends the tensions and anxieties of life in the crowded suburbs of society.
Jack
Posted by Jack Miller at Friday, July 29, 2011 No comments: Links to this post

Two paths intertwine in this film, the way of Grace and the way of Nature. Either way, love is the only way to achieve happiness. Such is the explicit message of Terrence Malick's film, "The Tree of Life." All else impacts us visually, soaking our psyches with visual metaphor and reaching the depths of our emotional selves with memory, gesture, and whispers from a dream-like world. The film has the sweep of Koyaanisqatsi, the struggle for the sacred in Nature vs. the destructive forces of development, money, and the quest for power. The visual beauty of Kubrick is also here along with similar metaphors of birth, death, and the archetypes of human existence in an indifferent world. At times I even sensed David Lynch's nightmarish details, especially in the extended point of view of Jack in pre-adolescence.
There is a glimpse of the Zone of Totality, as we see the total eclipse of the sun in a series of celestial images that give the film its mysticism. At the gathering on the shore, the characters apparently forgive one another for all their transgressions. As with Kubrick, though, there is no final meaning or happy ending, and we leave the theater with as much a sense of meaninglessness as Sisyphus came to accept. The cosmos and all human existence within in, connected or not,  may have great beauty, and perhaps like Keats, Malick presents the case that this beauty and the love within it are the only truth there is.
The San Francisco Chronicle gives a thorough review of the film, noting the two ways I mentioned above and offering excellent insight into the film's merits:

The Tree of Life

Drama. Starring Brad Pitt, Sean Penn and Jessica Chastain. Directed by Terrence Malick. (PG-13. 138 minutes. At Bay Area theaters.)
If someone gave you, as a gift, a bag of diamonds and rocks, you would not see it as "a mixed bag." You would see it as a bag of diamonds with some rocks that can be easily pushed aside, and you would be happy to be rich. In the same way, Terrence Malick's "The Tree of Life" is at times trying and perplexing, but it also contains some of the most psychologically insightful and ecstatic filmmaking imaginable.
Malick shows you the world that you know, but he shows it in such a fever that you see it, not differently, but completely. It's a vision so alive to the mystery in everything that the simple depiction of a man walking into an office building feels like a feast of limitless possibility and geometric variety. To see "The Tree of Life" is to wish you could go through life seeing things in this way. There would be no fear of death because each moment would be so full as to contain lifetimes.
From the first moments, Malick presents his film as a contrast between two ways of understanding human existence. There is the way of nature, which sees only struggle and looks for reasons to be unhappy, and there is the way of grace, which is in touch with love and the broad movements of the universe. The way of nature is embodied by Brad Pitt as a hard-charging husband and father - it's a lovely performance from Pitt, whose control-freak facade never completely hides the vulnerability motivating it. Jessica Chastain, as his wife, embodies the way of grace. They live with their three children in a Texas suburb in the 1950s and are seen through the memory of their eldest son, Jack (Sean Penn), looking back from the present.
As in "The New World," voice-over narration, to the accompaniment of subjective shots of trees and sky, gives us the characters' inner thoughts. These produce a unique effect. It's as if we're seeing a dream of the past and hearing mental vibrations that, either randomly or because of their particular strength, happened to survive time. The feeling is one of privilege, to be picking up on precious currents of consciousness, seemingly lost to the world.
At its most basic, "The Tree of Life" vividly replicates, in cinematic terms, the way we remember. There are general memories, moods and sensations, and then there are incidents and bits of conversation that are recalled with absolute present-tense lucidity. And so the incidents of voice-over are interspersed with straightforward scenes showing this 1950s family. Malick is trying to give us life as it is consciously experienced, the unceasing inner monologue and its interplay with the outside environment, the thoughts of the past mixing with the suspended and yet always available present.
The ambition behind such an attempt is enormous, and Malick's success is complete. But he doesn't stop there. In "The Tree of Life" he doesn't only want to show what life and consciousness feel like. He wants to capture the nature of life - what life is. To this end, he films waterfalls and mountains, gives us long minutes of churning, multi-colored ooze floating in space, and even includes a brief dinosaur interlude. He is trying to give us the mind of God. No, more than that. He is trying to film God.
When he stays within the multiple minds of his various characters, Malick is working here at the level of genius. His handheld camera hovers with a sense of impending revelation. The beauty is beyond description. But when he ventures into explorations of the universe and its origins, the work becomes general and less interesting, liked warmed-over Kubrick.
Still, there is little doubt that "The Tree of Life" will stand as the cinematic achievement of the year.


Jack
Posted by Jack Miller at Sunday, July 17, 2011 No comments: Links to this post 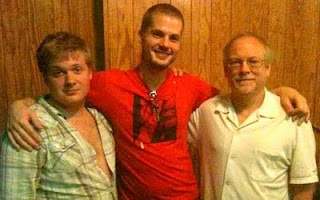 We celebrated the Summer Solstice with visits to Savannah. First Dar and I drove down for visits with John and with Dad and Kathy, the latter at Johnny Harris. We stayed at the familiar Bed and Breakfast Inn, having breakfasts of shrimp and grits and, second morning, strawberry pancakes. John and I walked the beach with its air of burning cyprus all the way from the Okeefenokee Swamp.
The second jaunt to Savannah came after Dar, Will and I heard Jay Brannan's sold out concert at Eddie's Attic in Decatur. When the show was over, Dar departed, but Will and I stayed long enough for Will to take over the piano and sing such songs as Gnarls Barkley's  "Crazy" accompanied by opening act singer Tristan Clopet. The night was too good to end, so we drove to Savannah, stopping at the Waffle House at 2AM where Will performed some Cee Lo Green covers for the ecstatic staff, one of whom recorded his singing.
After the meal, we drove on to Savannah, stopping at my brother's house. John then drove us to Tybee in his Cadillac to watch the spectacle of a sliver of crescent moon rising over the ocean, followed by sunrise as we stood on the windy beach, letting the cool waves wash our feet. 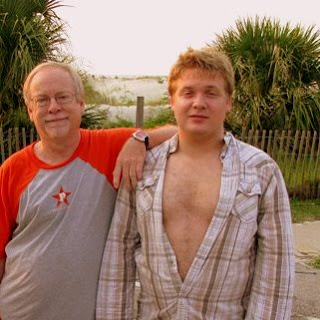 Sunrise over Savannah Beach
Will, John and I wound up downtown atop the Bohemian Hotel as a tropical storm blew in, walls of rain and lightning dramatizing the Savannah River, the bridge, the cobblestone streets below. Will performed again in the lobby, singing "Crazy" on a wandering musician's guitar, and pleasantly startling the guests running in from the rain. The friendly concierge or whatever he was, having heard us talk about Jay at Club One that evening, arranged to take us to our car by shuttle. He saved the day, we got in a decent nap, and arrived on time, which was too early, for the Encore performance of Jay Brannan in Savannah. Jay and I talked a good while and he mentioned his fans from the Atlanta show onstage. It was a great performance, though Jay seemed a bit depressed and tired. This was his last show of the tour. (see the vid. below from the show) 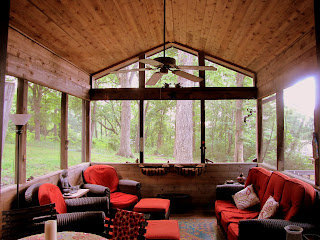 
A week later I followed up the trips to Savannah with a week on Lookout Mountain. It was restful and relaxing and cool there, as I house sat for Starr who was in Michigan. She returned late on Friday and we attended a dazzling pool party Saturday, culminating in an intimate swim with Starr, Donna, Katie, Brook, and me which Will happily joined as midnight approached. He serenaded us all poolside after the swim. On Sunday after a leisurely breakfast cooked by Starr and Donna, Will and I hiked to the Waterfall at Cloudland Canyon, concluding my summer trips thus far.
Here are the two main collections of photos from our trips:

http://youtu.be/MTFqt61NL5IFrom the show in Savannah- Vid by John Miller

Posted by Jack Miller at Friday, July 15, 2011 No comments: Links to this post